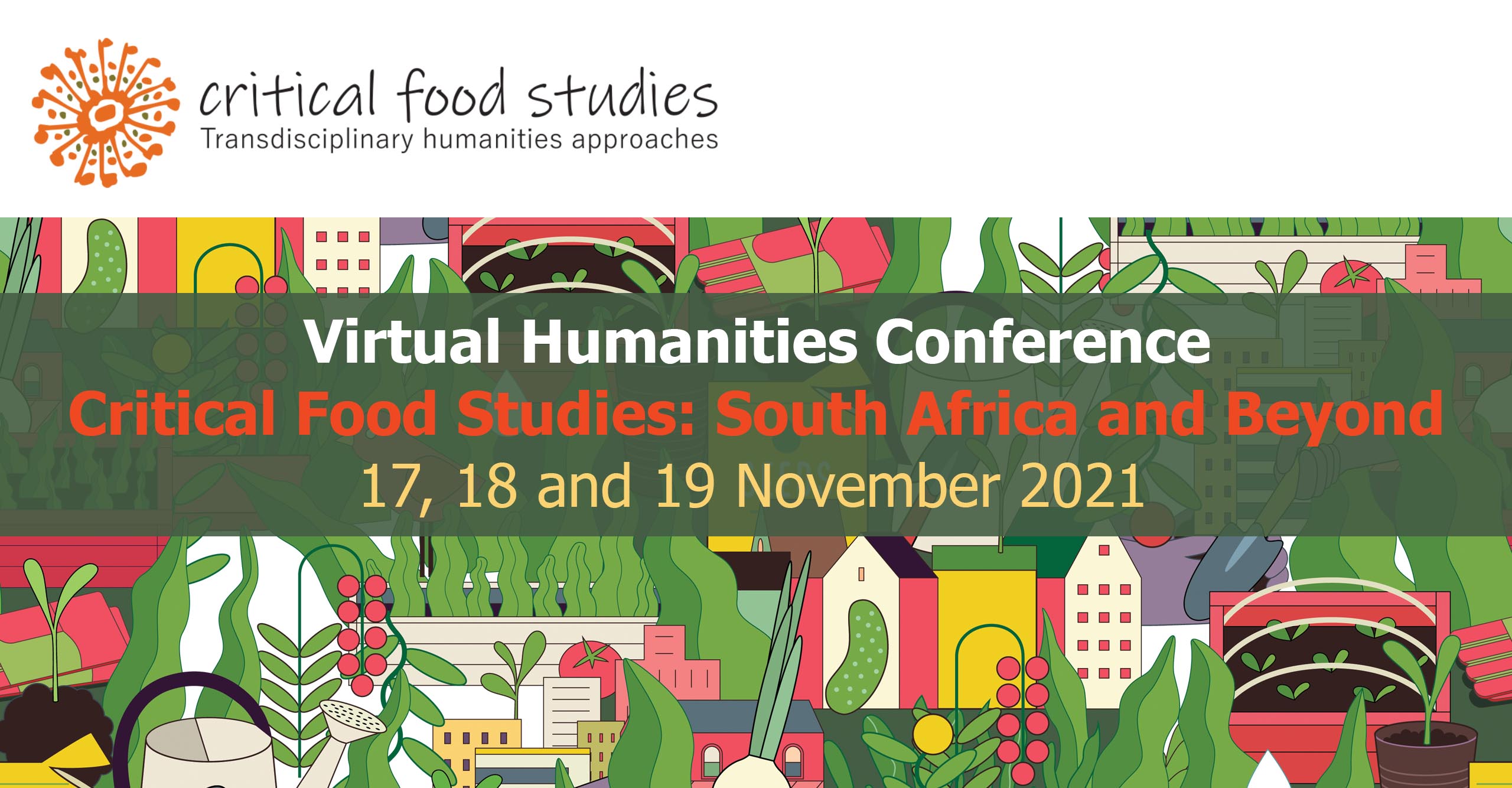 NOTICE OF ACCEPTANCE FROM: 30 September 2021

This virtual conference seeks to draw innovative humanities and creative work together in lively conversation. Humanities-driven food studies is making steady inroads into food security studies domains that neglect human, cultural and anti-positivist perspectives. By creating a platform for critical food studies driven by humanities, the visual arts and performance, this conference opens up critical thinking and creative expression about thee relations between food and the human both in and beyond South Africa.

Events will include panel discussions, dialogues, art exhibitions, demonstrations, pre-recorded performances. Note that both non-academic and academic presentations and genres are encouraged. One pivotal aim of the conference is to generate lively engagement among thinkers, artists, performers and food growers or makers.

The conference invites proposals from individuals and groups for panel discussions, dialogues, art exhibitions, demonstrations, and pre-recorded performances to address the below-mentioned themes.

ALL submission must include:

Submit your proposal shaped as an abstract: (1 paragraph to a page, with 5 -6 keywords including images where relevant for creative proposals) on or before 15 September 2021 via the ‘Submit a proposal’ button. 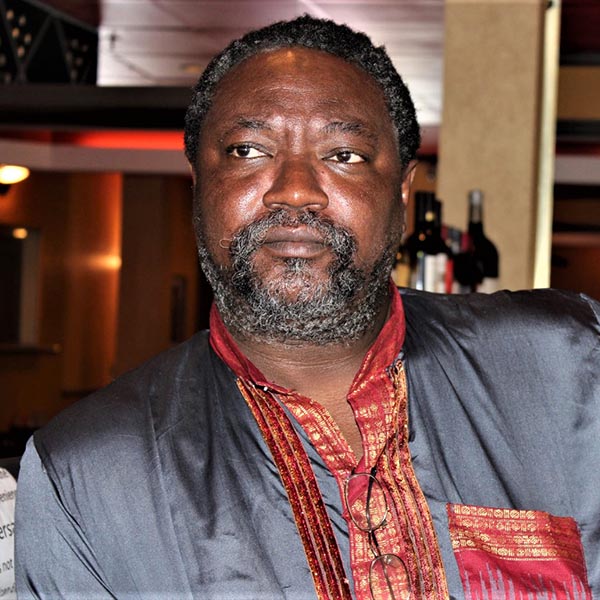 My research interest is in Media studies and my ‘recently’ published (2012) book is “Diaspora and Imagined Nationality: USA-Africa Dialogue and Cyberframing Nigerian Nationhood“, published by Carolina Academic Press.

The book focuses on how the concept of nationalism is discussed by geographically displaced Nigerians across the World Wide Web. It may not be explicit about how Africans in general survive outside of their homeland; the book definitely speaks to how to harvest the thoughts of Africans in different locations around the world. The methods deployed in the publication definitely came in very handy during the research phase of these collaborations. I had the opportunity, a few years ago, to visit Osijek, Croatia and Makeni, Sierra Leone to experience first-hand how the different communities were coping with the aftermath of war and the role of creative arts and artists in the very different socio-economic societies.

I served as the president of South East African Languages & Literatures Forum (SEALLF). I am also a member (in spirit) of the Association of Nigerian Authors and a founding member of the Coalition of Nigerian Artists. While working as a photojournalist, I coordinated the film viewers’ forum for the Goethe Institute in Lagos, Nigeria. Now I am, is a language teacher at the University of Florida. I am a poet who combines theory and practice of photojournalism, and environmental activism.

I trained first as a Botanist (81-84) and much later received the British Council Chevening scholarship to study for a master’s degree in TV/video for Development from the University of Reading, United Kingdom. I earned another master’s degree in Organizational Communication at Ithaca College, NY. Finally, I obtained a PhD in media studies from Rutgers University, NY. 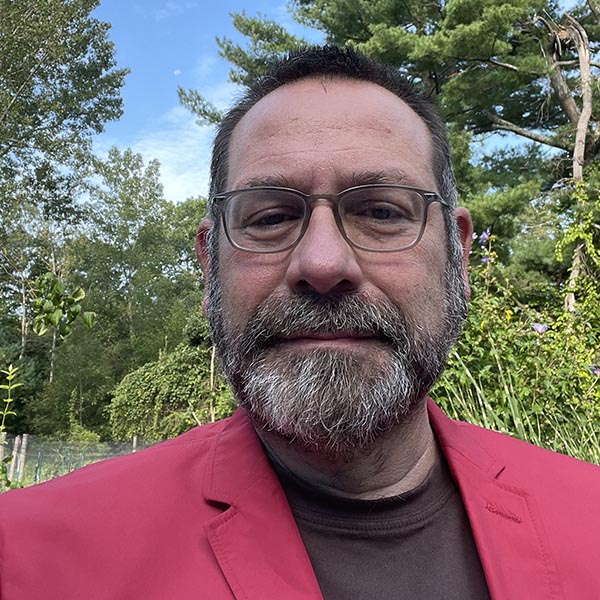 Jonathan Bishop Highfield is Professor of Literary Arts and Studies at Rhode Island School of Design is and the author of Food and Foodways in African Narratives: Community, Culture, and Heritage (Routledge) and Imagined Topographies: From Colonial Resource to Postcolonial Homeland (Peter Lang).

His writing on postcolonial ecocriticism and foodways has appeared in numerous book and journals. He teaches courses on postcolonial literature and food studies and enjoys cooking.

Reading narratives through the lens of food and foodways reveals different ways that writers deploy agriculture, cooking, and eating to highlight the traumas of history, the emptiness of displacement, and the power of community. What I try to ask is what is food doing in the narrative? How does paying attention to it reveal something that Elizabeth A. Eldredge calls “a hidden transcript”?[i]The descriptions of preparing a meal, working in a garden, or butchering a chicken, seem so commonplace that the meaning instilled in those passages can go by without notice. What do those domestic moments reveal about the dynamics of gender, of power, and of class in narratives? 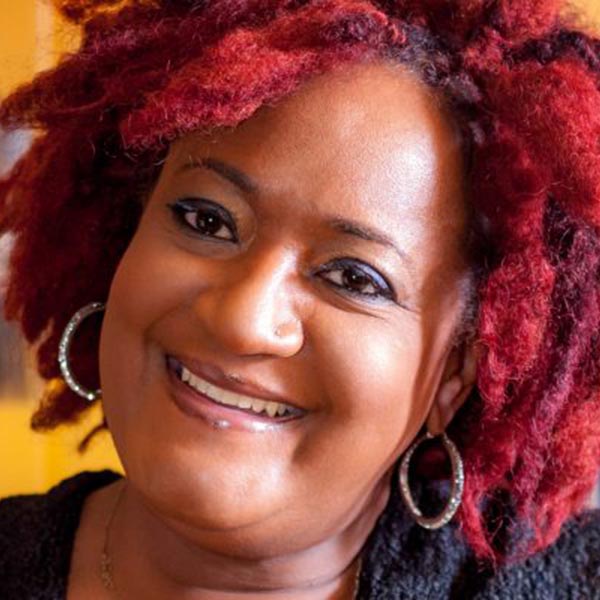 Dr. Psyche Williams-Forson is Professor and Chair of the Department of American Studies at the University of Maryland College Park.

She examines the lives of African Americans living in the United States from the late 19th century to the present. In addition to several journal articles and book chapters, her work on material culture and food has been published in her books,Taking Food Public: Redefining Foodways in a Changing World and the award-winning Building Houses Out of Chicken Legs: Black Women, Food, & Power. Her new book, Eating While Black: Food Shaming and Race in America is forthcoming in spring 2022. 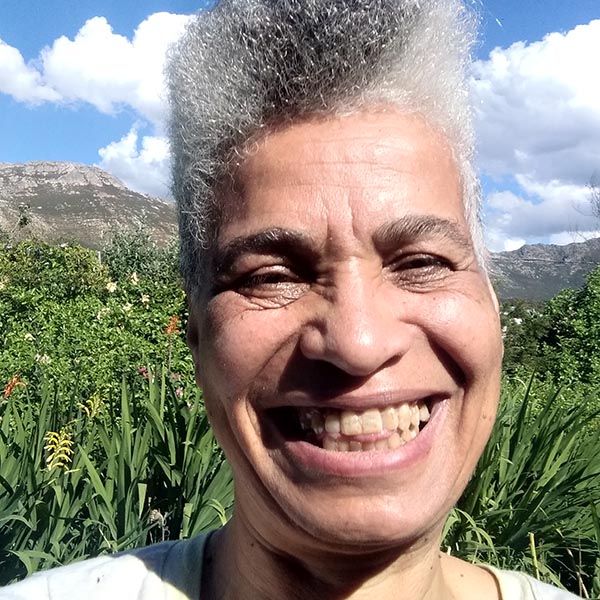 “Queers Saving the Planetary Ecosystem: A Short History of Earthworms”.

Yvette Abrahams holds a PhD in economic history from UCT, and has consulted for decades for NGOs and government. A former Commissioner for Gender quality, she steered programmes on poverty, energy and climate change.

Dr Abrahams has also been an active academic, and has worked as a lecturer and researcher both in South Africa and the United states. She has published widely, with her best-known work being studies of Sara Baartman, research on lesbians and queer theory/politics and writings on gender and climate change. Dr Abrahams was one of the first feminists to address gender, feminism and climate change in South Africa. She has also been an organic farmer for several years, and currently runs a small business on her smallholding just outside Cape Town for producing carbo-neutral organic soap and body products. 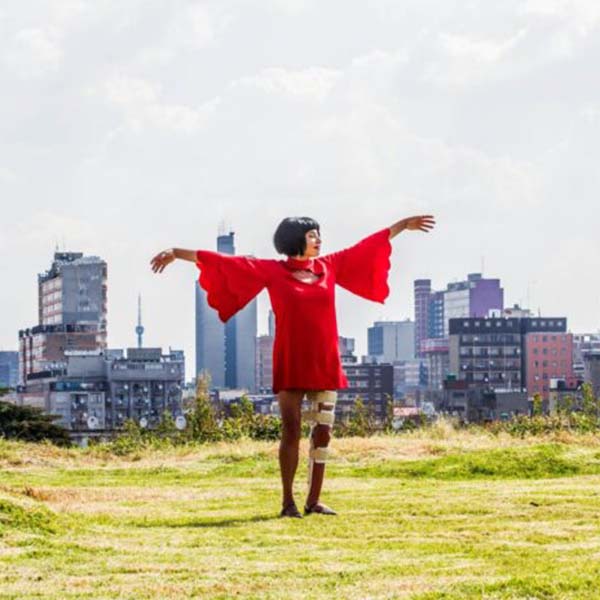 Shelley Barry is one of South Africa’s most innovative documentary film-makers, the winner of numerous awards and has had her films screened at festivals around the world. Currently a lecturer in documentary and experimental film and national cinema at the University of Johannesburg, she is also the director of her own company Twospinningwheels. Shelley Barry is well-known for her trilogy, Whole a Trinity of Being(2005), Diaries of a Dissident Poet (2014) and Here (2019). Barry’s films are distinctive in focusing on what is usually not seen or thought about. Food and eating – within human beings complex lives –  is one example of this. This session will involve a screening of aspects of Barry’s work focusing on food, and will be followed by discussion. 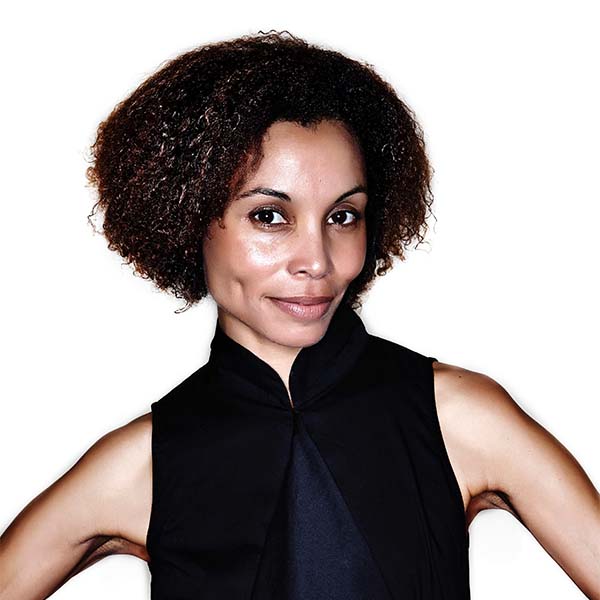 And Then… Negotiating acts of communion through consumption

Jacki Job’s most recent oeuvre is inspired by the teachings of the praying mantis and resists centralising the Anthropocene in re-imagining perceptions of bodies in physical and social terms. The film, And Then… challenges our learnt sense of embodiment, matter, human experience, freedom and intimacy. Danced in her signature butoh-esque style, its relevance to “critical food studies” is oblique but profound. It thinks through strategies of building relationality and dissolving barriers by consuming what is different. The dance prompts aesthetic, philosophical and metaphysical provocations around – inter alia – what it means to “eat” or be “eaten”, what “needs” the human body has, how the human body is usually situated in (and can resist) a hierarchy in which matter and other species are instrumentalised and made passive. She is accompanied on piano by José Dias.

Job launched her independent career as a choreographer-dancer in 1994. Since then, she has conceived, directed, choreographed and performed more than 70 full-length works, produced interdisciplinary collaborations in various places across the globe. job’s practice has been eclectic and largely informed by non-Western aesthetics. She finds particular synergy with Japanese philosophies related to ways of inhabiting the world with restraint and a sense of serving the other. Her interests lie in developing performance modalities that regard imbalance, invisibility and vulnerability as provocative qualities to construct identity. Currently, Job is a Senior Lecturer in the Centre for Theatre, Dance and Performance Studies at the University of Cape Town, and remains active as a choreographer, dancer and academic researcher. 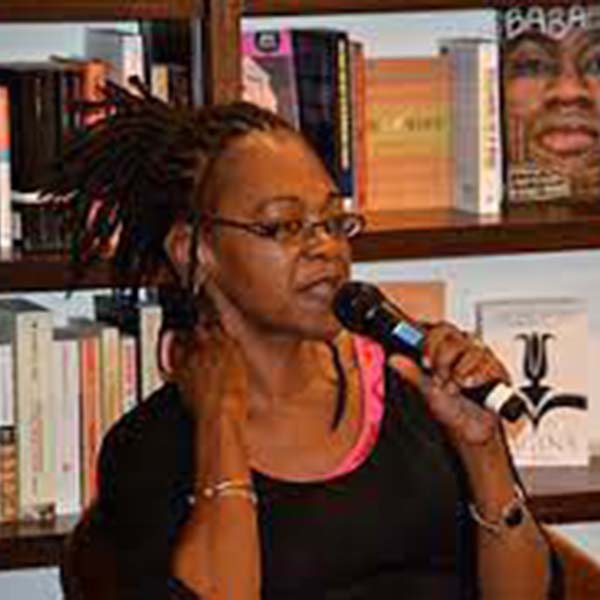 University of the Western Cape

Desiree Lewis is a professor in the Women’s and Gender Studies Department at the University of the Western Cape. Read More...

She is an interdisciplinary feminist academic who has had an abiding interest in culturally marginalized literary, visual and popular cultural texts and traditions. She has taught, participated in research networks or held research fellowships in South Africa, as well as in Finland, India, Sweden, Uganda, the US and Zimbabwe, and is keenly interested in transnational dialogues from the standpoint of the global South. The author of Bessie Head and the Politics of Imagining and co-editor of Surfacing: On Being Black and Feminist in South Africa, she has also published widely on the politics of feminism and sexuality; black women’s writing and visual culture, and, more recently, food as material culture. Her writing on food straddles academic and more accessible writing, and includes “Bodies, Matter and feminist freedm: Revisiting the Politics of Food”, “Decolonising Food Systems and Sowing Seeds of Resistance”, co-written with Donna Andrews, “Food, Anxiety, Freedom”, “’We Eat Sushi Now: Targeting Hungry Students at South African Universities”.

Lewis sees critical food studies as a field warranting serious and focused attention among academics and intellectual activists beyond the academy – both in South Africa and, more generally in the global South. She is committed to exchanges between humanities academics and artists, poets and activists. These, she believes, can generate robust inquiry into some of the most inspiring, complex and challenging developments of our time, while also challenging “scientism” and neo-liberalism in the burgeoning academic and popularised discourses around food. 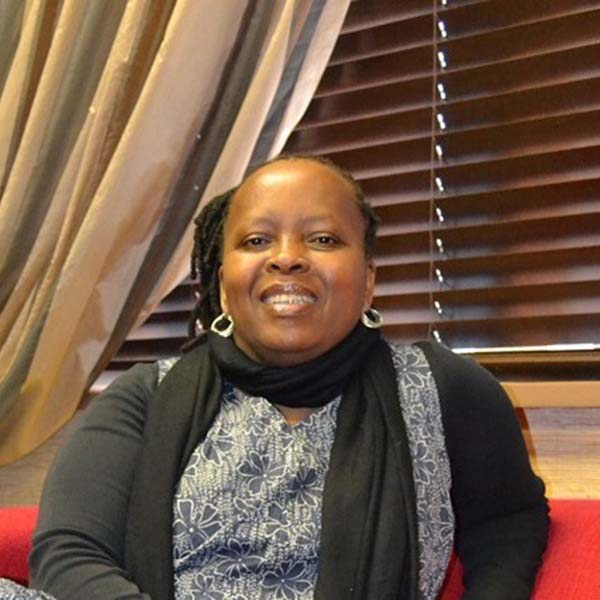 Relebohile Moletsane is Professor and the JL Dube Chair in Rural Education in the School of Education at the University of KwaZulu-Natal. Read More...

Her work focuses on understanding and researching poverty, HIV & AIDS, gender inequality and gender-based violence as barriers to education and development in rural communities and schools.  Moletsane She is co-editor (with Claudia Mitchell) of the 2018 book, Disrupting Shameful Legacies: Girls and Young Women Speak Back Through the Arts to Address Sexual Violence. Rotterdam: Brill/Sense Publishers. She is a Co-Investigator in the project: Accountability for gender equality in education (AGEE): Critical Perspectives on an indicator framework for the Sustainable Development Goals(PI: Elaine Unterhalter, University College London). Moletsane is co-author, with Vasu Reddy, of the 2021 article, “In search of the perfect curry: A gender perspective on the Durban Curry in two contemporary cookbooks” in Gender Questions, 9 (1).

Lewis sees critical food studies as a field warranting serious and focused attention among academics and intellectual activists beyond the academy – both in South Africa and, more generally in the global South. She is committed to exchanges between humanities academics and artists, poets and activists. These, she believes, can generate robust inquiry into some of the most inspiring, complex and challenging developments of our time, while also challenging “scientism” and neo-liberalism in the burgeoning academic and popularised discourses around food. 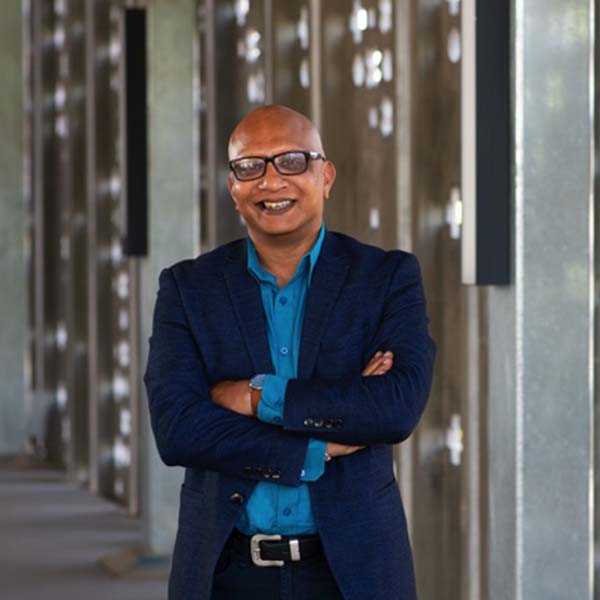 Vasu Reddy is Professor of Sociology and Dean of the Faculty of Humanities, University of Pretoria. Read More...

Beyond his primary focus that addresses questions about gender diversity, sexualities, public health and equality of which he has published extensively, recent publications also address social and humanistic questions such as The Fabric of Dissent:Public Intellectuals in South Africa (lead editor, 2020), Ethics, Politics, Inequalities: New Directions (co-edited, 2021) and University on the Border: Crisis of Authority and precarity (co-edited, 2021). He recently also co-edited with Desiree Lewis a themed edition of the journal, Gender Questions (2021) focused on critical food studies.